11 Developments in Cloud Expected to Influence 2016 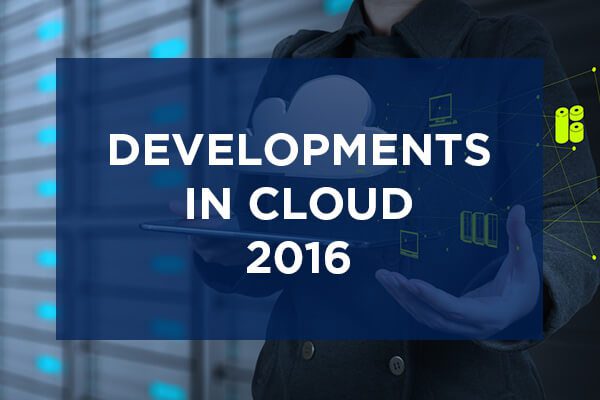 This blog post and its associated images have been reproduced with the explicit permission of TkXel , MarkiTech’s technology partner.

Cloud computing is a term which was coined a long time ago but only received the recognition it deserved in the recent past. The term started echoing in the global technology market and clarified the concept behind cloud computing which seemed fairly vague until today.  Over the years, the term evolved and moved to other phases of development such as Software as a Service (SaaS) and application service provision (ASP).

Songnian Zhou, the CEO of Platform Computing, stated that the benefits of cloud computing were realized by the IT professionals “in terms of increased storage, flexibility and cost reduction”. It allowed companies to store their valuable data on cloud network in a cost effective way.

In 2015, the use of cloud computing amplified and it became evident that cloud revolution was inevitable. With benefits ranging from low cost storage options to making data more scalable, cloud computing is going to set new records in 2016.

Mentioned below are the anticipated trends for cloud computing in 2016:

1. Increase in the use of Cloudops

With an increase in the use of Cloud computing, the concern for maintenance of data, its recovery and performance management has emerged. This concern can now be handled with the help of Cloudops.

Cloudops ensures data security and makes it easy to manage critical information. Previously, IT Ops was in play which is now replaced by Cloudops to manage cloud data efficiently. Cloudops are said to predict analytical trends and raise flags in case of a security breach.

Recent trends in the technology market have shown an inclination toward hybridization of cloud computing. Hybrid cloud computing refers to the use of private or public cloud services as a combination having an impact on applications and their underlying services.

It has been recommended by cloud experts that companies should start integrating their data and its applications to make a hybrid form. The benefit of this is the linking of internal systems of an enterprise solution directly to the external environment through an integrated cloud model which can be used to make better decisions for businesses.

Cloud Services Brokerage has increased in the past year and will be on the rise in 2016. A cloud service brokerage facilitates enterprises in moving to cloud network and enables them to consume cloud services efficiently. Within the next few years, this form of brokerage will increase along with a growth in the usage of cloud services.

Cloud computing has numerous features and functions which can be availed by enterprises on the basis of their needs. For instance, enterprises can make use of low cost IT models through cloud and grow their businesses with the help of improved service delivery.

Moving data to cloud certainly is beneficial for enterprises but making applications which support cloud computing can play a significant role in their growth.  Cloud computing is like a sound wave according to Forrester Research.

It comprises of two types: the first one enables enterprises to meet their technology needs with the help of a cloud network and the second one is focused on its application. In 2016, the focus of cloud experts will be on the provision of services which can make better use of analytics and micro-service support for the next generation applications.

Enterprises lately were consuming cloud services while the service providers handled the implementation strategies along with the datacenters. If enterprises take up the task of setting up their own datacenters, the overall cloud service experience would be improved. This will make the process more efficient and lead to better performance management. This practice has recently started and proved its worth within a short span of time.

7. No More Barriers to Cloud Computing

Containers are crucial for next generation cloud applications. Gartner stated that “containers are emerging as a critical technology for enabling agile development and micro-service architectures.” With an increase in the merging of services and development of micro-services, containerization will grow to facilitate these services.

IoT refers to the connection of physical objects with sensors and devices making them data collectors and enabling them to exchange valuable information. IoT has already influenced technology world and signs have started to appear in the form of Smart Cities Initiatives by IBM.

The demand for cloud services has increased recently and is expected to further increase in 2016. To handle the pressure and respond to the growing demand, service providers are aiming to hyper-converge service platforms. According to IDC researchers, hyper-convergence expenditure will increase to $1.6 billion in 2016 from $806.8 million in 2015.

Security concerns have increased with the growth of cloud computing. So far, no incident of security breach has been reported but the risk has amplified. The reason is the increase in the sharing of confidential data on cloud.

A survey conducted by Alert Logic in 2014 showed vulnerability scans on cloud increased to 44% from 2013’s 27%. In 2016, this threat will be on the rise along with brute force attacks and cloud experts will try to make data more secure on the cloud.

These developments are going to impact the technology market trends and the cloud strategy used by companies in 2016.