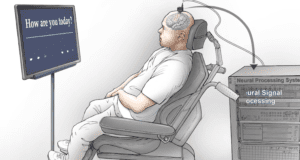 Learning to speak – it’s one of the first lessons life teaches us. From our first word, our earlier years are spent honing and refining our language. However, in diseases like stroke or amyotrophic lateral sclerosis – also known as motor neurone disease – language is lost forever.

Or at least it was.

Now, the latest artificial intelligence in medical research and brain-computer interfaces are restoring communication to people unable to move or speak.

Published in the prestigious journal Nature, the new technology is game-changing. For millions of sufferers around the world, this is a monumental step for artificial intelligence in global health.

But how did the team do it?

To convert the paralyzed man’s thoughts into words, the team began developing a brain implant. The patient, in his 60s, had previously lost all movement below his neck due to a spinal cord injury in 2007.

Surprisingly, the brain actually retains the ability to perform fine movements up to a decade after the movement was first lost. Because while the brain maintains normal functioning, it is the connection to the muscles which is severed.

That’s where the brain implant came in.

Researchers implanted two brain-computer interface chips – the size of a baby aspirin – in the left side of the brain, near the motor cortex. The motor cortex is normally the part of the brain that controls movement.

Next came the hard part.

The man concentrated on writing the letters of the alphabet. In his mind, he was writing with an imaginary pen on an imaginary legal pad.

The chip detected the signal from the motor neurons. These signals were then translated from imaginary hand movements using the latest artificial intelligence in medical research. The AI algorithms were the true breakthrough: decoding the complex neural noise into individual letters.

In short: the man’s intended hand and finger movements became letters on a computer screen.

It was a victory for AI in healthcare.

The man was able to write at a speed of 90 characters per minute, with an accuracy between 94.1 to 99% using the system. Equivalent to roughly 18 words per minute.

Once, it would have seemed like science fiction. No longer; it’s reality.

Who are we at MarkiTech.AI?

At MarkiTech.AI – we are your ideal partners to discuss your data problems and what is the art of the future of solving major challenges.

MarkiTech.AI, a top AI development company in healthcare, is on a mission to innovate healthcare one project at a time for payers, providers, and end-users. We have completed 40+ HIPAA-compliant projects in healthcare and we are experts in AI / Machine learning with 35+ engineers, data scientists & health care experts.

We would like to offer FREE digital transformational consultancy via our Fractional CTO team of highly experienced individuals and understand your unique technology challenges and see if there is a potential fit.

Book a free consultation today to see how can help digitally transform your business at https://markitech.ca/our-services/

Follow us on LinkedIn at @Markitech for more updates.