Back to the Future – with smartwatches as wearables!!! 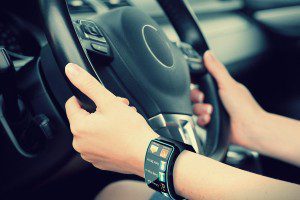 Smartwatches are changing the way we live, conduct business and use our phones – the $85-100Bill wearable market is posing significant opportunities of growth

Few weeks back (October 21, 2015 to be exact) all of us, at least those of us who had lined up three decades ago at cinemas to see Marty McFly travel to 2015 – the Future, as it was back then – were in a serious fizz. We were all lining up the technologies and devices that we now possess as a matter of routine and chalking them off again what “Doc” Emmet Brown had predicted in the iconic movie series. Lexus has announced the release of the hoverboard, and Nike will be shipping the first pair of self-lacing sneakers to Michael J. Fox. “TV Phones” have been around for over a decade as Skype and recently as FaceTime. 3D has come and gone. And there were Doc Brown’s wearable silver spectacles that helped him see around the DeLorean. That’s Google Glass for you.

Ok. So Flying cars and time travel still haven’t happened. But something that the movie franchise hadn’t even foreseen has; the wearable computer.

No, I’m not talking about the smartphone. I’m talking about its wearable progeny, the smart WATCH! While Google’s head-mounted Google Glass, launched amid the by now necessary and totally predictable fanfare in April 2013, had been withdrawn by 2015 (clumsiness, privacy issues, price), its un-lamented demise did not stop the rise and rise of the other wearable device – the smart watch. In 2012, ABI Research had predicted the smart watch segment to jump to 1.2 million units by 2013. Once Pebble Time (by Pebble), Moto 360 (by Motorola), LG G (by LG) and Samsung “Gear Live” had already seen commercially successful launches of “proof of concept” devices, it was only a matter of time that the biggest “inventors” in the industry, Apple, would launch Apple Watch. And by April 2015, 1 million loyalists had already pre-ordered the device for their personal use and pleasure.

According to SmartWatch Group’s industry report for 2014, a total of 6.8 million smart watches have been sold by last year by 89 different companies, at an average price of USD 189/-. And this year is almost at an end. There must be a lot of smart watches out there by now, with most of the high-end market going to Apple Watch, who have rapidly moved to close the gap between Smart Watches and – well, regular – watches.

This is what my favorite (read most convenient for couch potatoes) source of all knowledge and wisdom – Wikipedia – has to say about smart watches: A smartwatch is a computerized wristwatch with functionality that is enhanced beyond timekeeping…. modern watches are effectively wearable computers. And the penny drops. Wearable COMPUTERS!!! It breaks the heart to think that their rise spells the technological redundancy of my Breitling Mont-brillant. Smart watches run apps, play back all kinds of digital media (though squinting at Kate Upton on your watch is bound to make passers-by squint at you and give you a wide berth), and many of them have touchscreens that allow you to access your calculator, compass, thermometer and heart rate monitor (especially in parallel with your viewing of Kate Upton).

Of course not all of these watches are on the Internet – yet – and have to be “synched” with a smartphone that does the heavy lifting with message notification, GPS navigation, and calendar synchronization. The miniaturization limitations of its entrails currently prohibit full functionality. Its just too small to be a fully powered computer. But isn’t that what they said of the smartphones back a mere eight years ago? The Blackberry, the Apple and a plethora of Android powered devices have shown us how much juice we can squeeze out of these “pocket computers”. So it should only be a matter of time before some Millennial whizz-kids come up with a radically new way of making the required nano-transistors and hook the Smart Watch into the Internet of Things.

In fact, if you’re a pathological optimist like me, you probably already have begun to notice the evolution of this device. The pessimists will attack the smart watch from five angles, and the smart watch beats them on all.

1. Smart watches are just duplicating features you already have in your smart phone.
Perhaps that is true, to an extent. But there are features where it already doesn’t depend on your phone, such as tracking your health and activity levels. And even where it does piggy-back on the phone, its not quite as bad as the detractors would like to make it appear; smart watch users report a significant reduction in those irritating push notifications, not to mention the OCD behavior of constantly “checking” your phone for notifications.

2. Smart watches must piggy ride your phone ALL the time.
Yes, we heard a lot of that when Apple, announcing the Apple Watch, tacitly acknowledged that it might not be quite as “smart” as touted, since it would require you to have your iPhone available all the time. Not so any longer, though. Developers have already written apps that work on the smart watch without having to rely on your phone. You can now go running (yes, put down the gaming console, will you?) and leave your phone behind. I can assure that clunky (oh how we’re spoiled ) piece of metal in your pocket banging against your thigh is no fun when your trying to catch up with the Kate Upton look-alike. So basically it depends quite a lot on how you intend to use your watch. It can get quite independent of your phone in a lot of the apps. And its only a matter of time before the kid becomes a teenager and goes off to college.

3. Smart watches are a “Revenge of the Nerds” on you; jocks don’t wear them.
Apple and Samsung have been in a neck-to-neck dash for the last year or more to produce smart watches that look like, well (again) regular watches. What better than to wear a clever little gadget that still looks like your Breitling (that still hurts so much) but packs the punch of your quad-core desktop (well, almost). Not as clunky as small tin of candies, today’s smart watches are still not quite as sleek as they need to be to penetrate the smart fashion segment. But then, I still remember my first (not even smart) cell phone which was big enough to act as blunt instrument for violent murder. In comparison, my latest acquisition slips in so nicely into my slim-fits that I often have to check whether its still there. And the smart watch will come around too. Probably about the same time someone writes a “killer” app without which Western civilization as we know it would crumbles. And the the boxers will be flying off the shelves.

4. “Oh but they’re so difficult to use”..
Of course they are. Just like your smart phone. And your tablet before that. And your laptop before that. And your desktop before THAT!! See, you’re either a whiner and don’t take easily to new ways of doing things. Or you’re the kind who’s always grappled merrily with new technology and mastered it – not always from the Instruction Manual but by finding your own “cheats”. Either way, this is by far the weakest criticism there is in the market for using smart watches. Worse case, just hand it to your pre-teen and give him/her half an hour to unravel the mysteries of the smart watch to you. Just the same way you used to show your own dad how to operate the VCR in away that made him feel like a Neanderthal. The shoe pinches on the other foot.

5. Battery Life.
And when all else fails, blame the battery. But really, if you can compromise on the big, bright touchscreen, and if you schedule the use of various sensors – its is a smart watch after all – you can save a lot of juice, enough sometimes to last the better part of a week. So if Kate Upton’s jogging video doesn’t have to lull you to sleep every night, you really could watch her again on the subway.

The bottom line is that it’s a very important next step in the evolution of smart wearables, and the criticisms are pretty much of the same kind as were faced by the smart phone a mere decade ago. It is already helping you make changes in your lifestyle and workflow, and rather than resist it and be reluctant late user, you can choose to ride the curve ahead and make this gadget one of the lynchpins of your daily routines. Especially if they issue one that is a knock-off Breitling.

We at Markitech, are striving hard to keep you posted on latest ICT & digital trends like Internet of Things, Mobility, Digital Marketing, Big Data, Cloud and Apps. We are here to help and consult you on these digital trends that are disrupting the way we live and do business. Please connect with us at info@markitech.ca or myself directly at nauman.jaffar@markitech.ca; and let us help you make sense of it all.

Also, attend our latest FREE webinar on Internet of things (IOT) on 12th November 2015 @ 10AM EST and register on the link below.